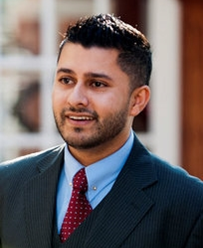 A champion of the middle class and working families, Assemblyman Raj Mukherji proudly represents Hudson County in the NJ General Assembly, where he serves as Deputy Speaker, Chair of the Judiciary Committee, and Vice Chair of the Appropriations Committee. From 2018-2020, he served as Majority Whip of the General Assembly. A lawyer and serial entrepreneur with healthcare, real estate, technology, and regulated cannabis holdings, he was previously an information technology CEO, Deputy Mayor of Jersey City, and a Sergeant in the U.S. Marines. He has also served as a local prosecutor for six years and an Adjunct Professor at New Jersey City University, where he taught Constitutional Law. Raj has achieved a half billion dollars in aggregated enterprise value across companies he founded and led as CEO or co-owner, while creating hundreds of jobs along the way.

During his four terms in the Legislature, Assemblyman Mukherji has earned a statewide reputation as a prolific, effective lawmaker. His bills and appropriations priorities have focused on economic development and job creation; infrastructure and mass transit; college affordability; protecting seniors and expanding their access to healthcare, prescription drugs, and essential services; environmental protection; veterans’ affairs; public safety; social justice; addiction prevention and treatment; animal welfare; helping small businesses thrive and grow; and myriad other issues of importance to his constituents. He was named the Assembly’s "Humane Legislator of the Year" recipient for 2015 by the Humane Society and 2015 Legislator of the Year by the NJ Law Enforcement Police Officers Brotherhood. In 2017, he was recipient of the Mortar & Pestle Award from the NJ Pharmacists Association, awarded annually to a non-pharmacist with the greatest contributions to the profession of pharmacy and the public. Assemblyman Mukherji was also named a 2015 honoree of the Boys & Girls Clubs of Hudson County for championing the expansion of teens’ access to mental health services, and he received the 2015 Legislator Award from the NAACP for his civil rights advocacy. He was a 2021 Sierra Club Award recipient for his stewardship on natural resource protection and climate change.

The son of immigrants, Assemblyman Mukherji supported himself through high school, college, and grad school as an emancipated minor when economic circumstances forced his parents to return to their native India. After suffering a pituitary tumor, stroke, and other ailments, Raj's father – the late Asim Mukherji, an accountant and musician – could no longer work as a result of his health but could not afford health coverage without employment. This experience shaped Raj's perspective and interest in healthcare access and policy and inspired much of his subsequent advocacy in that area.

Raj had founded an Internet consulting and software development company while in middle school, grew it, and later sold it to a larger technology company to enlist in the Marines two weeks after 9/11 at age 17, where he served in military intelligence as a reservist. The young entrepreneur withdrew from high school after completing ninth grade to focus on his business endeavors and support himself after his parents were forced to move to India. At 15, he enrolled in an early college program at Bard College at Simon’s Rock and eventually earned a Bachelor of Arts from Thomas Edison State University, an individualized Master of Liberal Arts focused on national security from the University of Pennsylvania, and a law degree (Juris Doctor), cum laude, from Seton Hall University School of Law. He is admitted to practice law in the State of New Jersey; the U.S. District Court, District of New Jersey; the U.S. District Court, Western District of New York; the U.S. District Court, Northern District of Illinois; the United States Tax Court; the U.S. Court of Appeals for the Third Circuit; the U.S. Court of Appeals for the Armed Forces; and the Supreme Court of the United States.

At 24, Raj was appointed Commissioner and Chairman of the Jersey City Housing Authority, the youngest in city history. At the state’s second largest housing authority, he earned acclaim for his oversight and various reforms. At 27, he was appointed Deputy Mayor of Jersey City. At 28, Raj won a six-way Democratic primary election for Assembly by a 36-point margin in 2013 and won the November general election by a 20-point margin. He was reelected in 2015, 2017, 2019, and 2021, most recently by a 4-to-1 margin.

Assemblyman Mukherji is presently the only former Marine in the New Jersey General Assembly. He was the first Indian-Bengali state lawmaker elected in American history and the second South Asian American legislator to serve in state history.